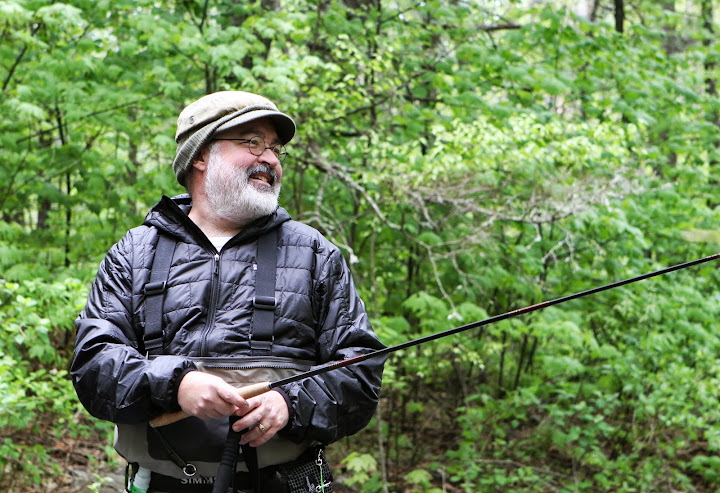 I feel blessed to have attended all 3 Tenkara Summits and #3 in Virginia was a blast. As this blog is being typed, I am just starting to get over a cold that somehow I picked up at the Summit. Seems the art of shaking many hands and talking to so many people can cause one to get the cooties but I am happy to deal with it after a great weekend doing everything tenkara.

As most of you are probably aware Tenkara Summit #1 was in West Yellowstone in Montana, #2 was in Salt Lake City Utah, and now #3 was in Harrisonburg Virginia. All 3 were great fun and now I look forward to future Summits to meet fellow customers and tenkara fisher-folk.

But… I have now added another goal to strive for at Tenkara Summits. The Art Of Putting Checkmarks Next To Trout On My Bucket List.

Going into Tenkara Summit #1 I had no Bucket List that I can remember. Although I brought my tenkara gear with me I never once fished. I attended the first Summit mostly as a carefree tenkara person that was behind the scenes doing customer support for Tenkara USA. Just that May 2011 I had come off of 2 months of running the customer service department for Tenkara USA and no one really knew me other than those who post on the TUSA forums. I drove all the way from California to Montana with my wife in tow in our newly purchased 2007 Toyota FJ. This was a trip for a few days to explore Yellowstone and meeting tenkara people soaking up as much as I could in that short time.

Going to Summit #2 the Bucket List was created but I did not realize it at the time. In 2012 I had become known as the face behind the customer service desk at TUSA and getting to meet more tenkara people was foremost on my mind. Living in California we have tons of rainbow trout and to date that was all I caught. I kept hearing there were tons of brown trout in Utah so I planned on going after my first brown trout. Summit #2 was great and I loved my time in Utah. I came home happy that I caught my first Brown Trout and was already looking forward to Tenkara Summit 2013. I met so many customers and it was great putting faces to names at this event.

Now #3 Summit was here and I had another mission. Mission Brook Trout!  I officially had my  Bucket List now and knew I would try my best to catch my first brookie. This Summit would be the first time where I could leave the cell phone at home and not worry about a customer paging me while on the river yelling that their computers no longer worked – prior to joining Tenkara USA I worked in IT customer service and had to be within reach 24/7. This time I could venture out and enjoy myself to the fullest.

We arrived in VA the day before the Summit and fished that Friday. With very high and fast water from the rains, I was skunked and caught zero fish. Saturday was all about Tenkara Summit Day 1 so there was no fishing for me. That Sunday though we fished at Mossy Creek where I caught a nice big brown trout but no brookie still. It was looking like that Bucket List would not be appended to during this trip.

But, come Monday after the Summit, I finally caught a nice handful of brook trout. How excited I was to be all waded up, working fast moving mountain waters with two friends Daniel and John, and having them see the glow on my face when I landed my first brook trout.  By the way, before I forget, I think the Amish and God has something to do with my first fish caught in Virginia.  I had been skunked all day and right as an Amish Buggie (yes an Amish Buggy) clippity clopped by Mossy Creek, I felt a huge tug on my line and what appeared was a nice fat brown trout.  Therefore I must thank God and the Amish for this first catch in VA.  hehehe.

If you look back at each of my Summit pictures you will see a common theme. The theme of a huge smile on my face. Not only is it great to attend the Tenkara Summit and meet so many cool people, you have the opportunity of a lifetime to fish water you may not get to again and a good chance to checkmark a trout off your own Bucket List.

I am not sure yet where Tenkara Summit #4 will be at but my bet is Colorado. 8-). I will have to google Trout of Colorado and see what trout I need to add to my Bucket List and make it a point to catch one of those buggers. [Daniel’s note: it is likely that it will be held in Colorado, and the greenback cutthroat will need to be added to your bucket list]

I hope all those that have attended at least one of our Tenkara Summits have enjoyed yourselfs. I am a firm believer you make a party as good as you want it to be. For me I make it a point to say hi to as many people as I can and make the Tenkara Party a rocking good time. Join us at the next Tenkara Summit, and maybe come with your own Bucket List of trout, or even a Bucket List of meeting fellow tenkara freinds face to face, and help us make the next Summit a great event again.

Here are some pictures with captions that will tell a small tale of my trip to Virginia last weekend. I want to say it was great meeting so many of you at the Summit and I came away with even a larger smile on this man’s face for attending this great event.

Video doing a Walk-Thru on day 1 of the Tenkara Summit 2013.

Daniel doing a seminar at the Tenkara Summit 2013.

Tenkara Summit 2013 Lunch on Saturday. Everyone was hungry for food and more tenkara info to come after lunch was over.

John doing demo session on Sunday at a nearby river.

Daniel demo on Sunday at the river. Customers all sitting in the hillside that dropped down into the river. Daniel down below dealing with fast fast water current and trees all around him at the bank. Made for an interesting demo. Live action as they say. 8-)

Daniel and John walking in a nice meadow below a dam in VA. I caught my 2nd brookie not far from where I snapped this picture.

Close up of 2nd Brook Trout I caught. Real beauty caught on a front-side eddie.

Having a good pizza dinner after fishing all day. Even had a customer from Switzerland join us at the Tenkara Summit 2013 so we draged him off to fish later in the evening in the dark and then eat some pizza. Daniel Hoda is his name and he was so nice, treated all us tenkara boys to pizza and beer. I think we need to have a Tenkara Summit in Switzerland. 8-) Daniel snapped this shot of me drinking a brew and enjoying some live bluegrass music.

We all went to Mossy Creek Fly Fishing to stock up on tenkara and other fly fishing goodies.

A big thank you to God (and the Amish) for helping me catch trout in VA. hehehe