Fish seek two things in particular: food and shelter. Both of these elements change in the winter, food becomes more scarce, and in many parts of the country so do their options for shelter. As temperatures drop, the stream will freeze; places for fish to hide change and so do the places with greatest food-generating potential. Undercuts by slower moving may get blocked by ice.  But,  when it warms up, the ice opens up and reveals a new kind of structure that anglers can target: ice shelves.

Some time ago I was reading an article by Ralph and Lisa Cutter in California Fly Fisher. In the article, Ralph describes putting on his winter clothes and dry-suit and diving into a semi-frozen Sierra Nevada lake to observe fish and bugs underwater.  He describes diving underneath the large ice-shelf to explore the unexplored parts of a frozen lake. I clearly remember the image of cave diving coming into my mind, but I physically felt very cold while reading his words. While I do not have the article to quote from, he describes finding a big concentration of bugs – midges I believe – right at the edge of the ice shelf. Food? Check.

Further, most streams and lakes will not freeze to the bottom. The ice that forms in the majority of parts will be a shelf, meaning there will be plenty of places to hide underneath. A predator coming from above would have to piece through the ice to get to the fish. Shelter? Check!

Areas where water is flowing into may stay open and are also likely to have a better amount of food coming in. For example,  take a look at the foam line in the first picture below, on the opposite side of the stream, the amount of ice there is smaller despite the shadow. And, as they say “foam is home”, as it often indicates places of stronger turbulence that may have taken bugs down as the water plunged into the pool, or water with slightly faster velocity that carries with it some food.

I have also noticed fish cruising under ice in places with slower water. In multiple occasions I would see their shadows gliding below the ice. They would come out and often “sip” right by the edge of the ice shelves as in the picture below, reinforcing Ralph’s observation that there are bugs at the edge of the ice. 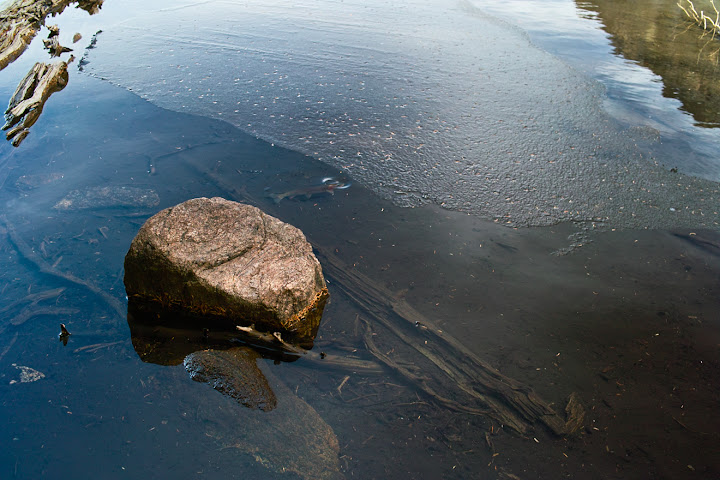 Can you spot the fish in the picture below? This was one fish I did not catch, on purpose. He was very close to the shore, a greenback cutthroat. I spotted him coming from below the ice and eating every time he stepped out of his protected ice cave. He seemed to sip down a bug every minute precisely. I just watched him, in awe, and somehow was able to resist the temptation to cast my fly to him. “Too easy” I thought. Plus, he was having it hard enough with little water that would soon freeze again. It is one of the few fish I have not cast a fly to but remember clearly. I still get as much joy from that memory as from any fish I have ever caught. 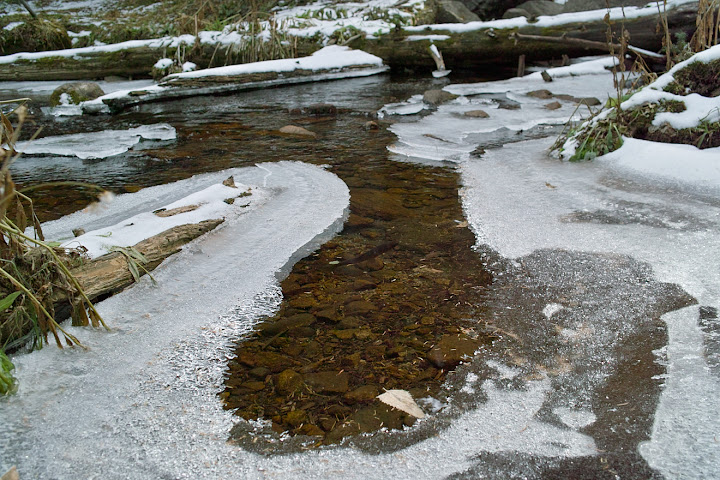 But, I couldn’t resist his neighbor… 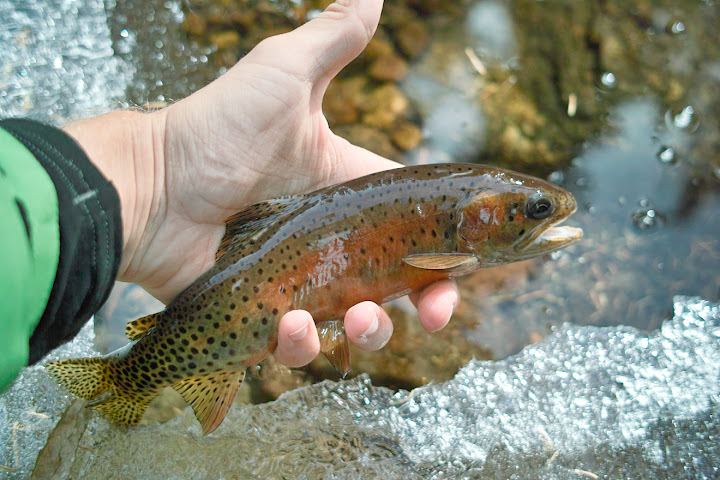